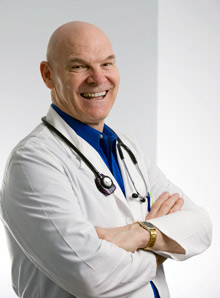 Dr. Samuel K. Gooldy, of New Hartford, NY, knows how to run a family practice. At the two practices he runs—one primary care, the other cosmetic—his family works along with him. His wife, Carol Gooldy, is office manager and a registered nurse, and his daughter, Angela, works part-time as a laser technician. His son, Eric, handles all things computer-related.

“We have an interesting dynamic,” said Eric Gooldy, who has learned to adapt an EHR system to suit their needs, improving diagnostic capabilities and billing. “He does all the Meaningful Use work for us,” said Dr. Gooldy. “He does a lot of the billing for us, supervising the billing in the office, makes sure that things get addressed as far as what has to be in the chart.”

Both father and son discussed their day-to-day operations as speakers at the NYeC Digital Health Conference in December 2011. Although he has never been formally trained to use the Medent system the practice employs, Eric Gooldy has long been interested in computers.

“It took me about a year to figure out how my father practiced medicine, and how to use it,” he said. In the way it so often happens: a child helps their parent to learn a new technology. “My father trusts me more than, say, an IT person who we’ve hired. I might slow him down for a day or two, but he knows my goal is to make him more efficient.” Both father and son joke about Dr. Gooldy’s lack of computer-tech savvy, yet it was a certain amount of forward thinking on the part of the doctor that had him embracing new technology early. His EHR system was fully implemented back in 2004.

“I guess, first of all, I saw it coming,” said Dr. Gooldy, “Even if they’re not sponsored by the federal government, things seldom roll backwards once the technology is available. The medical field was the one field that was left without computerization, and that was 10 or 15 years ago. As a medical community, we resisted computerization for years.”

He also understood something that many physicians who lack tech expertize may not: That he did not need to be an expert in using new systems to know that new systems would eventually be widely used.

“I’m 65 years old,” said Dr. Gooldy, “I’m not going to do this on my own. I’ve got a hundred functions on my cell phone, and I don’t even know how to use half of them.” However, he said, “You have to computerize, to get rid of all the system errors—things that, when we see them in the hospital, or the office, we know in our hearts there was nothing we could have done about it.” He gives an example of what can happen without EHRs: A patient comes in for an ultrasound. They have a narrowed carotid artery.

“Then they go away that weekend, some place on a trip, Lake Placid, and while they’re there, they have an incident—something happens, and they end up in the ER. They don’t have access to that information, the ultrasound. So they have to restart all that data collection—unless there’s communication.” Dr. Gooldy notices a generational difference in how patients relate to the sort of technology now becoming mainstream, such as having an MRI read on the same day as it was done.

“Patients really don’t appreciate that any more than I appreciate my cell phone,” he said. “Some of the older people, 60 or older, say ‘Oh, that’s cool that you can do that!’ But if they’re 30 or 35, they say, ‘Well, why shouldn’t you be able to do that?’”